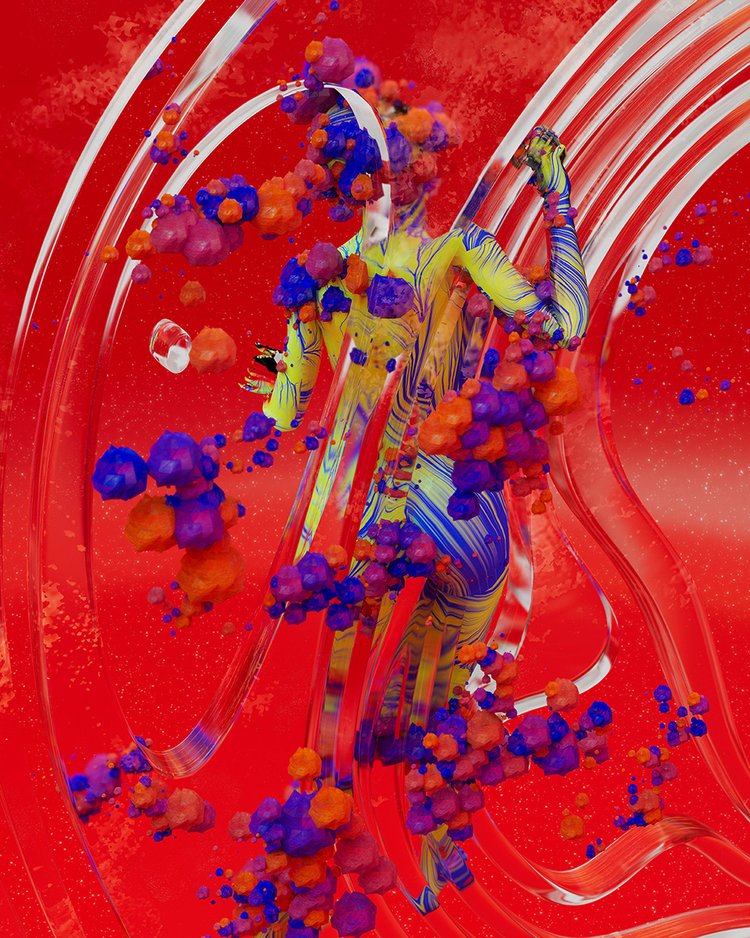 Akane Hiraoka continually explores multiverse concepts within her artworks. One of her latest exhibitions as part of Rome Experimental 2022 inspired her to add augmented reality layers to her multidimensional work.

Akane exhibited two AR-enhanced artworks at a members-only exhibition, Soho House Rome. The one night event generated almost 200 scans for her works and the artist credits augmented reality for the popularity of her exhibits.

London-based Akane Hiroka was an established motion graphics designer when she decided to swap the client briefs for her own artistic endeavours. “You obviously start with motion graphics because you’re interested in art. Over time, you realise that commercial work doesn’t give complete artistic freedom. Instead of following my clients’ briefs, I wanted to create whatever I want to create,” shares Akane.

The concept of the multiverse inspires Akane’s own paintings and digital art. “I am interested in time and space and believe in parallel worlds. I explore the idea of having more dimensions in our world,” she enthuses. “If you slice your time and then put these pieces together, it becomes motion graphics or moving images. I am trying to capture every single aspect of a particular moment and then dissect it into different dimensions.”

In less than a year since changing the course of her career, Akane’s multiverse-inspired works are quickly getting noticed. She has been named one to watch by Rome’s art lovers haven, Rossocinabro, and chosen as artist of the month by the leading art jobs listing site. Akane has also exhibited her digital prints and videos in multiple European galleries. Recently, augmented reality provided another dimension to her multiverse exploration.

When Akane was invited to exhibit as part of the Rome Experimental 2022, she wanted to enhance the way people engage with her work. “Until recently, we’ve only been able to go to galleries and simply observe art. It is great, however, we live in times where people increasingly want to deepen their experiences, and interaction is a big part of it,” says Akane.

Instead of letting people be mere observers, Akane opted to trial augmented reality for the experimental art event. “Augmented reality fits perfectly with the multiverse concept and quite literally gives my work another dimension. The digital layers are also a part of my art that enable interaction and sharing,” she tells.

The invite-only exhibition at Soho House Rome was attended by approximately 50 members. Alongside other experimental performances, Akane featured two of her AR-enhanced pieces titled Visual Hallucinations.

Both artworks interpret reality through the multiverse. Once scanned with the Overly app, augmented reality brings motion to the still images. The one-night exhibit generated almost 200 scans for Akane’s prints and the artist believes AR helped drive interest around her work. She shares, “People were excited to explore the augmented reality part of the 3D prints, they watched and filmed videos of the AR layers. It was exciting as I kept seeing Instagram stories of people sharing my work, which created a great buzz.”

“I also created AR business cards for the event. Those were gone by the end of the night,” she adds.

Following her first AR exhibition, Akane’s artworks can now be found at Rossocinabro. Their digital counterparts are available for purchase as NFTs on OpenSea.

Looking to the future, Akane plans to merge technologies and her work further: “I will include augmented reality as I continue working on my art. It drives great engagement, and with Overly, I can enhance my work with AR quickly and easily. I am also participating in virtual reality exhibitions and engaging with the metaverse art concepts,” she adds.